The major print media love cuttings costs, and consequently favour PR shots from companies and organisations, or stock agency pics, or ‘citizen photojournalism’ over employing staff photographers. So it’s hardly shocking that The Australian‘s front cover on July 13 relied on the Prime Minister’s own staff photographer to supply an image. 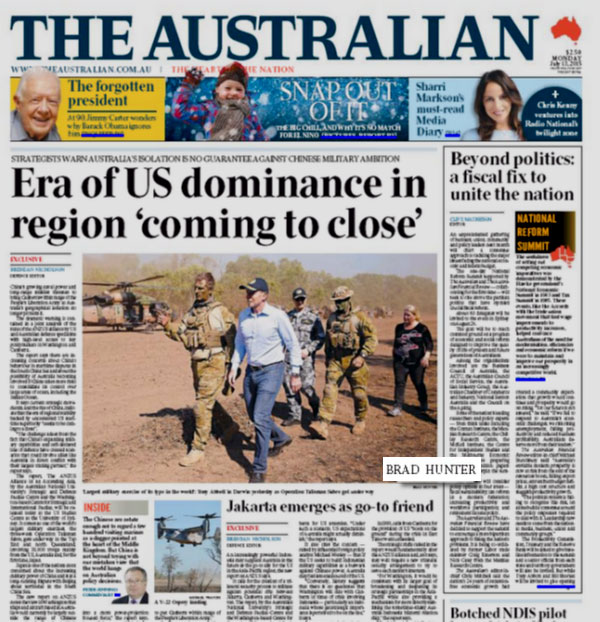 Most readers would have wrongly assumed Hunter was still a News Corp photographer. Source: Crikey

The photo was of Tony Abbott walking with Australian soldiers in Darwin, and was taken by Brad Hunter, an ex-News Corp photographer who has been the Prime Minister’s full-time photographer since April this year.

‘The reality is that we are not able to get a photographer to every event, particularly those put on at short notice, on weekends and in very remote areas,’ The Australian editor, Clive Mathieson, told Crikey. ‘On the occasions when we use pictures supplied by the Prime Minister’s Office, they should be identified as such. We will continue to strongly resist attempts by politicians to limit access to photographers and reporters to media events.’

In this case it’s perfectly feasible that The Australian couldn’t take their own photo: the event occurred on a weekend, there was likely little notice, and Darwin possibly qualifies as a ‘remote area’. And most people know that sourcing images (and video footage) from a third party is not a new practice.

But Crikey points out it’s unusual for a hard news publication covering a political story to print a front page photo taken by a photographer whose job is to make the PM look as gorgeous as possible.

The image is far from the type of propaganda typically taught in history and politics high school classes, but one Fairfax writer did describe it as ‘PMO propaganda’. Mathieson’s intention to ‘strongly resist’ politicians restricting access to photographers and reporters indicates he and his colleagues are aware of the changes in the relationship between the press and politicians.

Stephanie Peatling, a senior writer at Sydney Morning Herald, observed following Abbott appointing Hunter as his full-time photographer that there’s a growing trend of politicians  wanting to ‘exert greater control over their image’.

What politician needs a photojournalist or reporter when this image, along with an equally powerful message from Baird’s Twitter account was shared 358 times and ‘favourited’ 515 times. Source: Twitter

Earlier this year after NSW Premier Mike Baird won the state election his social media team posted on Twitter a monochrome ‘Obama-esque’ shot of him embracing his wife. It looks like an ‘impromptu, private moment’, but was carefully staged and organised by Baird’s digital media specialist, Tony Story.

And to top it off Fairfax Canberra photographer Andrew Meares, who was assigned to photograph Baird, was denied access on the night! Meares has covered his fair share of political events in 20 years on the job.

‘It is a staged moment posed to look like a captured private moment,’ he said at the time. ‘The image was deliberately made black and white. The JFK ‘Camelot’ era is immortalised in black-and-white candid family moments. The use of this filter seeks to give the image more authenticity.’

This sort of image control from politicians is prevalent in the US, and it looks like Australia is heading in the same direction. The Rudd and Gillard press offices both carefully considered hiring a full-time photographer, but Abbott made the first move following his election win in 2013 by hiring a videographer – frustrating TV crews who had to rely on the Governments’ press office for footage.

Outside politics it’s worth noting that TV stations often rely on video footage (‘Video News Releases’) in press kits for various stories – such as product launches or crime reporting. However, the media has a fundamental role to keep politicians accountable and in check, and the proven power of the photo is better in the hands of a media outlet than a political party.

It’s likely that this trend of ‘image control’ will grow as major media organisations continue to shrink, leading to fewer staff and smaller budgets to cover events around Australia.

Meares also points out that politicians (and other organisations) can directly send out messages and interact with audiences on social media, rather than relying on a traditional press conference or a working relationship with the media.

The power has shifted away from the press and to the politicians and corporations. But hey, at least someone is hiring press photographers!