Musicians and photographers have both been presented with a series of obstacles that came about when things ‘went digital’. Challenges typically involve new platforms that exploit both creative outlets in strikingly similar ways, and while pop stars like Taylor Swift wage a war against this exploitation, photographers have noticed the good fight is tainted with hypocrisy. 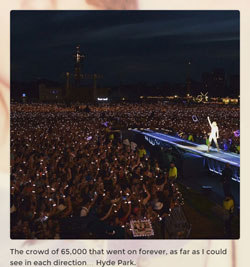 This is a screen grab from Swift’s Tumblr, posted June 28. We’d credit the photographer but there’s no indication of of who it may be! Source: taylorswift.tumblr

Swift has been fighting against music streaming services which have become incredibly successful yet offer poor financial reimbursement to musicians. And she recently achieved a victory after Apple backed away from refusing to pay artists during a 3-month free-trial of its new streaming service, Apple Music, shortly after Swift penned an open letter to the company.

‘I find it to be shocking, disappointing, and completely unlike this historically progressive and generous company. This is not about me,’ Swift wrote. ‘This is about the new artist or band that has just released their first single and will not be paid for its success.’

The contract states that photos ‘may be used on a one-time only basis for news and information purposes’, while the management company has ‘the perpetual, worldwide right to use any or all of the photographs’.

The contract clauses, posted by Seldon (sorry, you might need to squint). Source: junction10

Seldon penned an open letter of his own – and he praises Swift’s message but picks out the contradictions in what Swift wrote compared to the contract he came across. And then it went off!

‘…But you seem happy to restrict us to being paid once, and never being able to earn from our work ever again, while granting you the rights to exploit our work for your benefit for all eternity,’ he wrote. ‘How are you any different to Apple? If you don’t like being exploited, that’s great.. Make a huge statement about it, and you’ll have my support. But how about making sure you’re not guilty of the very same tactic before you have a pop at someone else?’

While Apple took the high ground and flipped 180 degrees on its policy, Firefly Management came back swinging, and defended the contract.

In a nutshell, when challenged by the BBC, the company said that under the contract photographers have further opportunities to sell photos ‘with management’s approval’, and that the ‘agreement does not transfer copyright away from the photographer’.

It’s worth mentioning that Seldon’s contract was outdated. In the ‘new improved’ contract, posted by UK freelance photographer Joel Goodman, the clause that grants photographers multiple sales with management approval mysteriously vanished. And it also threatens to destroy the photographer’s equipment if they don’t play by the rules!

‘If you fail to fully comply with this authorization, authorized agents of FEI… may confiscate and/or destroy the technology or devices that contain the master files.’

Melbourne-based music photographer, Lisa Drew, told Pro Counter that she can relate to Seldon’s message. She has captured live music for over 15 years, with one of her first events being the 2001 Big Day Out festival. 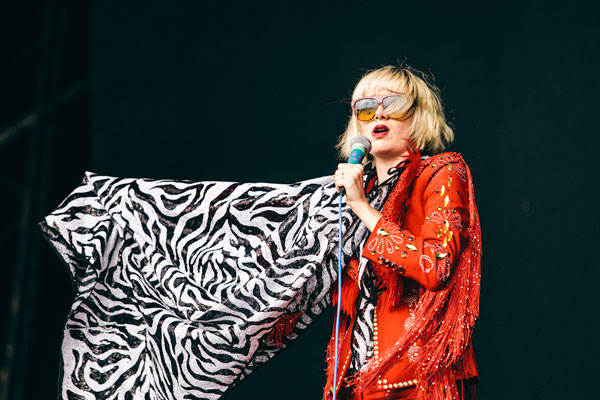 Fortunately, the contract Drew signed allows her to continue using the images she captured. So enjoy this photo of Karen O from the Yeah Yeah Yeahs, performing at Big Day Out 2013. Photo: Lisa Drew. Source: Supplied

However she has recently begun capturing more wedding and portraiture work, partly because late nights at gigs became increasingly tedious when she hit her 30s, and she wanted to focus further on growing her own business.

‘Like everything in life you have to work hard at it to be successful,’ she said. ‘Unfortunately events on their own don’t pay very well so you really need to be shooting portraits or editorial as well.

‘I have signed various contracts that restrict me from selling the images to make a profit, however I have never signed one that won’t allow me to use the images for my own promotion/website or social media. I think that is a bit extreme.’

In Drew’s experience, festival and stadium shows are generally stricter with how photos are used, and contracts vary from artist to artist.

But it’s a bit of a double-edged sword. Shooting smaller gigs rarely involves contracts – but obviously the photos have less demand and newsworthiness compared to the razzle-dazzle of an all-singing, all dancing Taylor Swift concert.

A reason for strict control over photos of celebrity musicians like Swift is due to T-Swizzy’s image operating largely as a controlled brand, a far cry from the majority of musicians.

Seldon responded to Swift’s management. He said that he does not dispute that Swift and other artists have the right to protect their image, but points out that concert photographers ‘have no interest in publishing an unflattering photo of an artist’.

‘For one thing, it would do far more harm to my career than it would theirs,’ he said. ‘Artists like Taylor Swift grant press photographers access to photograph their shows, in exchange for the expectation of helping to provide as much positive coverage in the media as possible – coverage that they are expecting their paid publicists to achieve. That is a mutually beneficial “something for something” exchange. She gets coverage, photographers get to earn a living.’

It’s unlikely that Firefly will budge and amend its contract to freelance photographers, and only one person would have the power to make them change it (guess who?). And the inconvenient truth for those battling for photographers rights is that for every photographer like Seldon and Drew who’d turn down a contract like this, many more would sign it in a heartbeat.

Update 1/7/2015: Taylor Swift played two sold-out shows in Dublin this week, but you won’t find any photos of the performance in The Irish Times, Ireland’s second most popular newspaper.
‘The terms and conditions of the contract are exceedingly restrictive and just not feasible for a working newspaper and website,’ Irish Times picture editor, Brenda Fitzsimons said. ‘The photographs may be used on a one-time only basis and by signing her contract we grant Swift perpetual, worldwide right to use the published photographs in any way she sees fit.’
Commenters on various photo blogs and news pages have applauded The Irish Times stance. Here’s to hoping more publications follow!

Click here to check out more of Lisa Drew’s photography!

One thought on “Photographer trades blows with Taylor Swift”