National Family Portrait Month (NFPM), an annual charity initiative that made its debut in May, might not have reached all its projected goals, but was an overall success in elevating the profile of portrait photography in the eyes of the public. 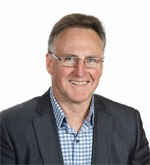 Bernie Griffiths (right), the organiser of NFPM, informed Pro Counter that the project raised $8937 dollars for the National Breast Cancer Foundation, missing the targeted $20,000 he had hoped to reach.

But fund-raising wasn’t the sole motivation for NFPM, he explained.

‘With the advent of digital, the industry started to struggle a little bit. Wedding and portrait photographers generally started complaining that everybody was taking photos with digital cameras and phones, and I felt the value of professional photography was being diminished. So I decided to do something about it.’

The way NFPM works is families pay a $65 participation fee and arrange to have a free portrait session with one of the 65 Australian photographers who volunteered their time and skills. From the shoot the family receive a free fine art print – but are also encouraged to spend extra.

Bernie was a wedding and portrait photographer for over 40 years, opening his first studio in Melbourne in 1969. Two years ago he finished up and became a business coach for those in the profession he spent most of his life in. He bluntly stated that he was always a fairly ordinary photographer, but managed to stay in business for so long because of his savvy marketing and business skills – which he views as the true ‘art’ for a portrait and wedding photography business.

‘Nowadays anyone can call themselves a professional photographer, so long as they sell an image – which isn’t hard with all this digital technology. They don’t have to earn their whole income from photography and work from a commercial premises, like they did back in my day, as defined by the AIPP.’

In the lead up to NFPM and to get the ball rolling, Bernie ran an event in Sydney and Melbourne.

The Sydney event brought local portrait and wedding photographers together for an informative meet up. Source: Supplied.

‘I put on five speakers and presenters who are photographers and donated their time in Sydney and Melbourne, and I got some sponsors on board so there was a little trade show as well. Those events were fantastic – the rooms were full and we had some great feedback. There was some auctions and fundraising, and in Sydney we had a representative, Kate Brett, come from the National Breast Cancer Foundation. It all tied in well,’ he said.

Both events had a small trade show supported by local businesses. This is from the Melbourne event. Source: Supplied

Also in the lead up to the month of May, he encouraged participating photographers to promote NFPM (and themselves) by contacting media outlets, printing and posting flyers, and communicating the cause to the local community.

‘When you position yourself and are perceived as a leader or an expert, it creates value. If there’s a photographer in a community where there’s a lot of other photographers and they get on the front page of the local paper, their value goes up immediately. They are separated immediately and seen as the leader, and that automatically means there’s more value attached to them,’ Bernie explained. 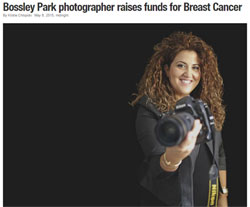 Murielle said she was slightly embarrassed that her ‘boofy head’ made the front page, but it’s there for all the right reasons! Source: Fairfield City Champion.

One photographer that did just this was western Sydney’s Murielle Sassine, who landed a front page story in the Fairfield City Champion.

‘The whole idea behind it is life can change in a heartbeat,’ Murielle told the paper. ‘It’s just recognising that you need to get the family together and capture these memories.’

Murielle, owner of Vivid Photography and Imaging, also heavily publicised the project through social media and approached several businesses that ended up supporting the project.

‘Cameras get lost, digital files can be deleted, but a printed photo can be preserved as a piece of family history. Mums are often not in photos as they are always taking them of the kids,’ she told the Daily. ‘Portraits are a physical documentation of a family’s features at that time, but I always like my photos to bring out something from the inside to show their personalities and let them shine.’

– Not a bad message to be amplifying, hey?!

Master photographer and Family Portrait Photographer of the Year 2014, Shireen Hammond, is ambassador for NFPM. She revealed her own experience of fighting breast cancer, and the importance of documenting the family as a whole. She said that it wasn’t until her diagnosis that she realised that her husband and six children had never been photographed as a group, despite being a family portrait photographer. 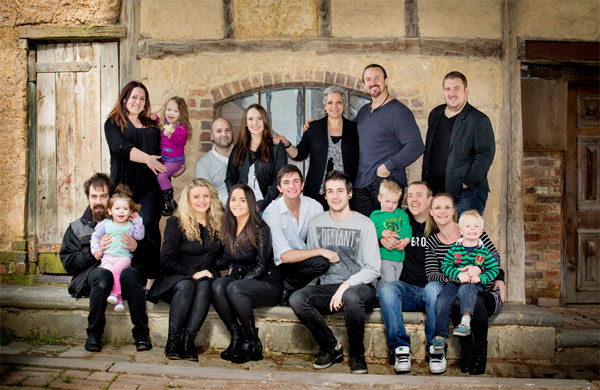 Shireen got the whole family together for this lovely portrait! Source: NFPM.

Bernie said he’s a tad disappointed with some aspects of the first edition of National Family Portrait Month, and plans to iron out the kinks to make next year bigger in every conceivable way. He wants more photographers, more participants, more events (Brisbane is on the cards) with bigger numbers in attendance, more sponsors, more regional involvement, and more publicity – with the ultimate goal of landing a spot on national television.

So perhaps next year we’ll see Bernie discussing NFPM with the likes of Kochie and Samantha Armytage on Sunrise, driving the message home to households across the nation that photographic family memories are priceless.