Research conducted by the US National Press Photographer’s Association (NPPA) has revealed that professional photojournalism is more memorable and valuable to the public than amateur or user-generated content. 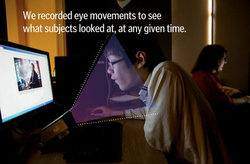 Eye tracking was done with an invisible, infared camera was used to record eye movements to see what a person was looking at in a photo during the research. Photo: Alex Garcia

The study conducted at the University of Minnesota took 100 photos taken by professionals and 100 photos submitted by the general public published by news organisations. They were mixed together and then shown to 52 study participants.

While 52 participants may not be quite enough of a sample size to provide irrefutable proof, the findings were that the nine out of 10 could identify quality photojournalism when they saw it.

Over 20,000 eye movements were tracked, recorded, and then analysed to see what attracted peoples’ attention, how long an image was viewed, if they read captions and so on. Ninety percent of the participants correctly identified the professionally-shot photos; more time was spent with images taken by professionals; the top 25 rated photos were all shot by professionals; and the top 20 most memorable photos were taken by, you guessed it, professional photographers.

‘You can tell which ones are done by people who know what they are doing,’ said a 21-year-old male participant. ‘Whether it’s the focus, or the angle, or the lighting, being allowed to be up close – all that stuff.’

This may not be astonishing news to most photographers, but given the trend towards wholesale sackings of photojournalists, it’s reinforcing (if also a tad galling) to know the public can both identify and value the professional result.

The latest publication to axe its staff photographers is US magazine Sports Illustrated, which fired its six remaining photographers a few weeks ago.

Director of photography, Brad Smith, told News Photographer that they are still committed to photography, but are not entirely certain what the new structure will look like. However he did say the former full-time workers would be welcome to contribute, which is perhaps a hint of what’s to come. The move does seem a little ironic, given the publication is largely famous for covering sport through photography, as suggested in its name.

The American Society of News Editors tracked the number of jobs at US newspapers from 2000 to 2012, which shows that photographers have suffered the highest rate of job losses, falling from 6171 to 3493 in 12 years – 41 percent. This is partly due to journalists being told to take pictures (and video) as well and the writing. And these findings aren’t likely to be a huge stretch from the current cost-cutting trend among Australian publications.

Oh, and NPPA also wanted to emphasise that while it commissioned the study, it had no assurance that the results would be favourable to the photojournalism profession. Just a sneaking suspicion, perhaps…