So who owns copyright of a pic snapped in a photo booth? This could be one for the courts if lawyers get their way in a curious case of disputed identity…. 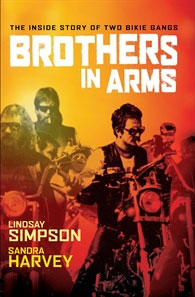 Leanne Walters father claims he is certain the photo is of his daughter. Source: Allen & Unwin

Janette Francis has filed a lawsuit against publishing company Allen & Unwin stating that her copyright has been infringed after finding a photo published in a book she claims is of her. However, the book attributes this photo to a completely different individual and both authors and publishers have stood firmly by this claim, placing the onus on Francis to prove it is of her.

The origin of the disputed material dates back to Father’s Day 1984 in Milperra, a south-western suburb of Sydney. A rivalry between two outlaw motorcycle gangs, the Camancheros and the Banditos, escalated into a bloody brawl – resulting in seven deaths, including 14-year old bystander Leanne Walters.

Two former Sydney Morning Herald journalists, Lindsay Simpson and Sandra Harvey, wrote a book about the brawl, known as the ‘Milperra Massacre’, in a book called Brothers in Arms: The Inside Story of Two Bikie Gangs and included a photo that is supposedly of Leanne Walters – the same photo that Francis insists is actually of her, at age 27.

Allen & Unwin filed an application to strike out the substance of the claim made by Francis, describing it as ‘fanciful, implausible and improbable to all available material’, and supplying evidence to suggest the photo is a portrait of Walters. However, Justice Katzmann has ruled this as ‘hearsay and innuendo’ and states that if Francis can prove the photo is of her then proceedings may follow. If she does prove the photo is of her then this is where things become interesting.

Francis wrote in her statement of claim that the photo in question was taken in a photo booth in Liverpool, and Justice Katzmann makes the observation that ‘the real question is not who is depicted in the photograph, but who took it’. Allen & Unwin have not disputed that if Francis can prove the image is of her, then she is the author. But ‘whether or not that allegation is made out should be determined at trial’ Katzmann said – which appears to never have been seriously tested in the courts.

While this has little relation to professional photographers, it does have the potential to effect the way the law determines who is the author and owns the copyright to an image.

The case is certainly not clear cut, and while it may not even reach as far as interpreting individual nuances relating to copyright ownership, it will certainly keep some lawyers busy.

It brings to mind the bizarre legal dispute that arose between Wikimedia and British wildlife photographer David Slater a few months ago, over whether or not he owned the copyright to a ‘selfie’ taken by a crested black macaque.