A blog dedicated to keeping the ol’ Canon rumour mill grinding has suggested ‘something important’ is coming from ‘Canon on the mirrorless front’ in 2015. 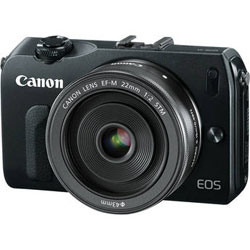 Rumour has it: The EOS-M could be a developmental dead-end.

Canon Watch, has received tips from two different sources (must be true!) saying that the company will soon announce the development of a new mirrorless camera, with more information set to be released by the end of the year.

While the two sources provided ‘largely identical information’, stating the system is not a follow up to the two previous and rather disappointing EOS-M models, one said the camera would have a full-frame sensor while the other said it would be ‘an EOS-M with rangefinder’.

This is where the details end, so few are convinced. Competing website, Canon Rumours, has expressed doubt by saying ‘I don’t buy it and don’t think Canon is going to develop a new line of lenses for a full frame mirrorless camera’. So there!

One would imagine that, if Canon is developing a new mirrorless system, it would be designed to compete with other mirrorless cameras which are starting to appeal to professionals. But perhaps the company is wary of cannibalising its DSLR dominance.

One thing for certain is that if it wants to maintain that spot at the top of the camera-making totem pole it had better pull a rabbit out of the hat real soon – and mirrorless has been the only growth segment in camera manufacture for the past 12 months or more.