‘Conflict reporting’, in particular photojournalism, has dramatically changed over the last decade. There has been a shift towards news companies commissioning work from freelance photographers in dangerous war zones, and it appears freelancers are all the more willing to put themselves on the line for that front page shot. 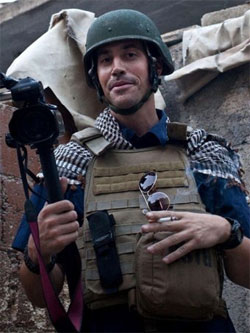 Agence France-Presse announced last month that it would no longer accept work from freelance photojournalists travelling to rebel-held Syria due to the ‘out of control’ conflict, which has become ‘far too dangerous’.

While Foley wasn’t exclusively assigned jobs by AFP, his connections to the agency were enough to make it re-evaluate its tactics and strictly commission content from local stringers, ‘who live in the area and who supply us with accounts, photos and videos’.

AFP isn’t the first news company to reject freelance photography from Syria, with the UK Sunday Times first taking this stance back in February 2013 to discourage freelancers taking ‘exceptional risks’. The Times, The Guardian, Observer and Independent all revealed they implemented similar policies shortly after.

Back in February 2013, Telegraph photojournalist Warren Allot told the Press Gazette ‘I’ve just come back from Syria, and would be hesitant to go back again at this stage’.

‘They [militant gangs] get hold of you, sell you to another group, maybe an Al Qaeda team, who then demand a huge ransom. If you are attached to a newspaper then it’s their responsibility to get you out.’

This image was made available by Jihadist media outlet Welayat Raqa, and was widely published by mainstream media, such as AFP. Source: Welayat Raqa/AFP

Pro Counter spoke to veteran Australian photojournalist Michael Coyne (pictured below), who covered many conflicts over the years, including the Iranian revolution in the late ’70s and more recently the Moro insurgency in the Philippines. He agreed with the AFP‘s stance to not accept photography from foreign freelance photographers entering conflict zones like Syria, and admitted that he himself wouldn’t travel to Syria – unless all the right precautions had been taken.

‘I don’t just fly there, get off the plane and go in. I’d make sure I’ve got the right contacts: somebody that can speak the language, can guide me around, provide on the ground knowledge and look after me,’ Coyne said. ‘Of course just being there is a risk – but it’s about avoiding unnecessary risks, which I think many of these younger freelancers don’t always do.’

The ABC published an article shortly after Foley’s death which suggested that there is a ‘new breed of [freelance] reporters’, which it described as ‘young, undoubtedly courageous – and yet often relatively inexperienced’. These freelance photographers work ‘without the support, protection, salaries – or insurance’ of staffed photographers, making them attractive to news organisations with ‘shrinking revenue’.

Coyne said that he thinks these particular freelance photographers are highly motivated to capture that front-page picture that will make their career. But he added that it’s up to them to make decisions based on the information they have, which is problematic for untrained or inexperienced freelance photographers – especially in the increasingly competitive industry that is photojournalism.

‘It is harder to make a living as a photojournalist. You’ve really got to have something extremely different because there are so many people out there now with mobile phones, and you’ve really got to get right into the heart of it to try and find something that will grab everyone’s attention,’ Coyne said. ‘There’s a lot more people going out there that might be untrained, taking risks or simply naive.’ 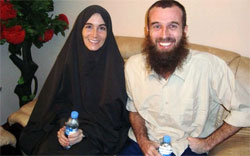 A specific example that captures this attitude was when Australian photographer, Nigel Brennan, ventured to Somalia in 2008 despite having no experience in war zones, and was kidnapped on his third day in the country. Over a year later, a $600,000 ransom was paid and Brennan was set free.*

Veteran war reporter, Jeremy Bowen, described a scenario to a BBC seminar last year. Years ago he walked through ‘intense fighting in El Salvador, waving a white flag’ and was unharmed. He went on to say that this would be impossible in today’s wars, where Western media ‘are seen as the enemy’ and the ‘risks for those reporting it have intensified’.

Since the Syrian uprising in 2011, in total there have been 72 journalist casualties in the country’s combat zones, according to an independent non-profit, the Committee to Protect Journalists (CPJ). This is around the same number of journalist casualties during the entire Vietnam war, one of the most heavily publicised wars, that spanned two decades.

Around 15 percent of those killed in Syria have been foreigners, but almost half have been freelancers – which is proportionally more when compared 10 to 20 percent killed in other dangerous countries, such as the Philippines, Pakistan or Somalia. Also worthy of mention is that in Syria two-thirds are classified as camera operators and just under a third photographers, according to CPJ, which is again higher than other dangerous countries.

Coyne is convinced that hostility toward foreign journalists (and any foreigner for that matter) from various militia groups around the world has been on the rise since the turn of the century, and suggests it can be sourced to small fishing communities off the coast of the Horn of Africa. 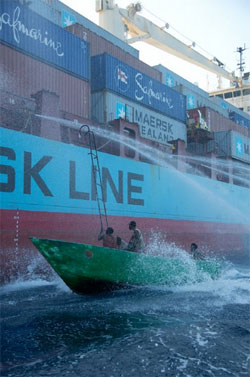 This would be fantastic photojournalism if it wasn’t a photo captured on the set of Captain Phillips, an award winning film about a 2009 Somalian pirate hijacking. Source: Jasin Boland/Columbia Pictures

Millions of ransom dollars demanded by Somalian pirates who hijacked ships and kidnapped foreigners has been paid over the last decade, highlighting to militant groups a government’s willingness to protect its citizen’s lives. The Australian photographer kidnapped in Somalia being an example, and more recently the kidnapping of Warren Rodwell by Filipino extremist group, Abu Sayyaf, who held the Australian for over a year. Rodwell was released last year, after 4 million pesos (roughly $94,000) was paid to his captors.*

Coyne acknowledges that there were kidnappings of journalists well before the pirates came along, but says the basis was typically strategic – to barter with governments and organisations, ‘like a game of chess’ – rather than a source of income.

While the pirates motives are financial, the overall effectiveness of their methods has led to similar tactics being adopted by militant groups like IS. But the chance of survival are even lower, with captives being executed as part of some kind of perverse publicity campaign that acts as the backbone for the terrorist group’s propaganda. 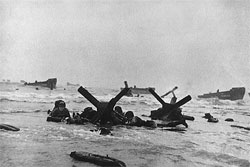 Capturing images from the front lines in Syria may have a heightened danger, as suggested by the ABC, AFP and other news companies, and Coyne – who is also quick to add that war photography always has and always will be unpredictably dangerous. He uses the example of Robert Capa, who took immeasurably risks when he followed Allied troops onto the shores of Normandy on D Day during World War II. Capa died years later after stepping on a landmine in South East Asia during the first Indochina war. And just this year German veteran photojournalist Anja Niedringhaus, who won the 2005 Pulitzer prize for her coverage of the Iraq war, was shot dead in Afghanistan – a far safer country compared to Iraq during the time she was working there.