Canon USA has announced the CINE-Servo 50-1000mm T5.0-8.9 Ultra-Telephoto Zooms lens, which is claimed as the ‘world’s longest’ 4k lens for large-format single-sensor cameras – and has a price tag to match. 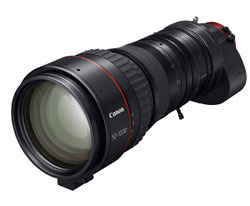 When using the built-in 1.5 magnifier on the US$78,000 lens, it can reach a range of 75mm-1500mm, which Canon believes will attract sports and nature producers chasing a close-up while maintaining physical distance.

The lens has 20x magnification and is designed for Canon EOS Cinema cameras, but can be mounted to a standard Canon EF DSLR or PL cameras, opening this beast up to big shot Hollywood cinematographers through to extremely well-off enthusiasts. It also features a removable servo drive, an 11-blade iris, a 180-degree focus ring and is just under a foot and a half long, weighing just under 7 kilograms.

This lens is obviously more of a spectacle to marvel at rather than a possible new addition to the gear kit. But if your genuinely interested in it, it has only been announced via Canon USA thus far, and will be available in the US sometime during the first half of 2015. Ifyou didn’t catch it previously, it’s priced at US$78,000. One may expect it to be available from a rental house in Australia sometime in 2015.