When Canon rolled out a teaser ad campaign on the New York Times website, featuring a countdown clock along with a cryptic message hinting at something big, the photographic media and community were rather drawn in. 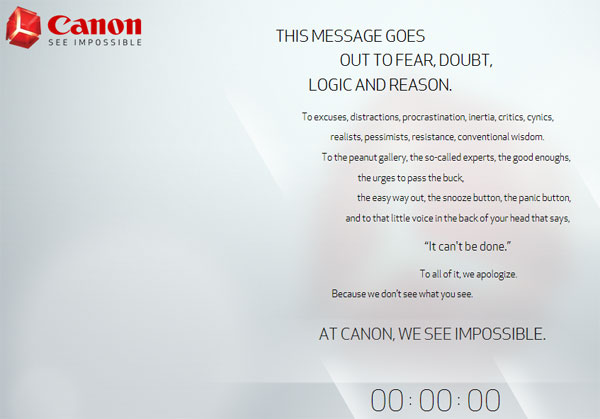 Many were hopeful that it might be the announcement of a ‘high megapixel DSLR’, a ‘new lineup of sensors’, or a ‘proper splash in the mirrorless market’, while others were were far more sceptical, calling it an ‘overused stunt’ and a ‘marketing gimmick’.

So when the countdown timer hit 0 and the veil was lifted from the Canon US ‘See Impossible’ website on Tuesday (October 7), it turned out to be nothing more than a self-promotional website that shows Canon customers using Canon products. Michael Duffett, vice president and general manager of marketing at Canon US said this was to present Canon as much more ‘customer-centric’, rather than ‘approaching everything from a product viewpoint’.

While this particular marketing campaign garnered a whole load of attention whose developers might argue is extremely successful brand exposure, the bulk of the reactions from most, including Canon shooters, vented frustrating and dissatisfaction toward the brand’s failure to deliver. And very few, if any, came in to defend the campaign launched by their brand of choice. Where are those fanboys when you really need them?

‘So lame. The ad, the website – everything about it. I am embarrassed to be a Canon user,’ one of the mostly negative 1500 comments from leading photography website DPreview said.

‘If they build all this hype and suspense with a countdown clock, and then have nothing to show for it at the end of the day, other than a new marketing campaign and a promise of more customer-focused solutions in the future… Well, they will lose me as a customer,’ an Adweek user also said.

A Canon Watch user even went to the trouble of creating this parody of the original teaser: 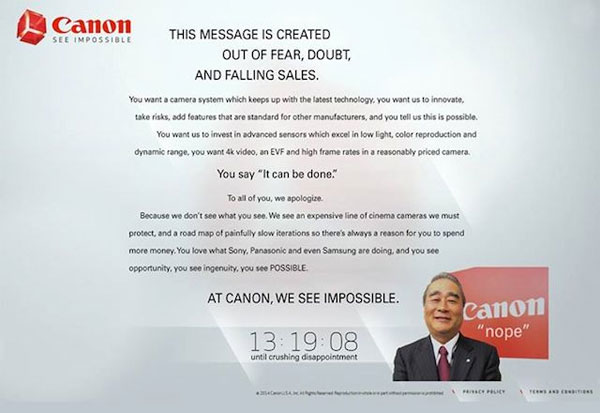 For those without 20/20 vision the tiny text reads: ‘You want a camera system which keeps up with the latest technology, you want us to innovate, take risks, add features that are standard for other manufacturers, and you tell us this is possible. You want us to invest in advanced sensors which excel in low light, color reproduction and dynamic range, you want 4k video, an EVF and high frame rates in a reasonably priced camera. You say “It can be done.” To all of you, we apologize. Because we don’t see what you see. We see an expensive line of cinema cameras we must protect, and a road map of painfully slow iterations so there’s always a reason for you to spend more money. You love what Sony, Panasonic, and even Samsung are doing, and you see opportunity, you see ingenuity, you see POSSIBLE’

In the name of fair and balanced journalism, we trawled through pages of comments to find a comment complimenting Canon, even if it was irrelevant to the campaign. We finally found one:
‘Canon has the best cameras in the world right now. They are the world leader in digital sensor technology and I am so happy I bought Canon over all other manufacturers,’ a Petapixel reader wrote. ‘The picture quality is awesome and the lenses they have are second to none.’