With the launch of a brace of impressive and attractively-priced new releases over the past 12 months, specialist lens makers – Tamron and Sigma in particular – are changing the dynamics of the market. 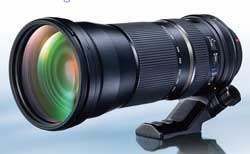 Canon US claimed that the recent across-the-board price reductions on its premium L series range – up to 33 percent – was to celebrate the 100 millionth EF lens milestone. But of course! The real reason is likely to be more market-driven: alternatives from other lens makers are making its premium range look distinctly overpriced.

For instance Sigma, with its superb ‘Art’ series of wide-aperture primes and professional standard zooms, and Tamron with its world-first 150-600mm (now joined by two Sigma models) and three other ‘Super Performance’ full-frame lenses (f2.8 90mm, f2.8 24-70mm and f2.8 70-200mm) are winning a lot of plaudits among reviewers, and sales among photographers.

And now for something completely different: Quietly moving up from the rear of the field comes Samyang. And Rokinon. And Bower. And Vivitar. Identical lenses made from the same South Korean factory under different brands. The Samyang range is unified by delivering surprisingly good optical performance and wide apertures at surprisingly low prices.

A partial explanation of the low prices is that Samyang doesn’t go in for any of this fancy autofocus business – all its lenses are manual focus. (The hipsters love ’em – so 1980s!) Another alleged characteristic is indifferent build quality, but Glenn Ward, sales director at exclusive Australian distributor, Maxxum Pty Ltd, begs to differ.

‘They are a solid, heavy lens. I think the build quality is extremely good. On average we only get about one back (for repair) every month,’ he said.

Backing that opinion, and as a foil to grey marketers (notably Kogan) Maxxum has recently implemented a two-year Australian warranty on Samyang lenses purchased from official Australian stockists. 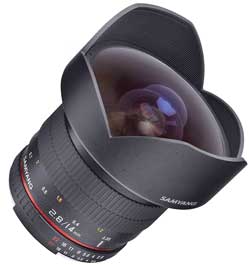 The Samyang range is particularly strong on wide-angle prime lenses, starting with an 8mm fisheye for APS-C cameras. (There’s a 7.5mm for M43 cameras, too.) The widest full frame lens (arriving in November) is a f2.8 12mm. Samyang makes lenses for 10 different mounts across M43, APS-C and 35mm formats. And also makes specialist video lenses to fit DSLR/CSC bodies. Most Samyang lenses are around the $400 – 550 mark. The most expensive model is a 24mm f3.5 tilt/shift lens at just over $1000.

Roger Cicala, from US photographic rentals giant Lensrentals is a leading authority on modern digital camera lenses. A fan of Samyang optics, he explained the attraction of the 14mm f2.8 full-frame lens, and by extension the Samyang range, thus:

‘I own their 14mm because at US$379 I think it’s an insane bargain for a very sharp lens. For that price, compared to US$2300 for a Canon 14mm, I’m more than willing to give up autofocus, accept some barrel distortion, and consider it disposable. If it breaks getting a new one won’t be much more expensive than the standard repair cost for a Canon 14mm and less than the repair cost of a Nikon 14-24.

Addressing that reputation for ordinary build quality he also notes: ‘[It] is held together inside with plastic, glue, and small screws. You won’t be using it for years.’ 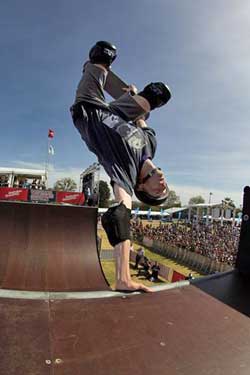 Glenn Ward says that Maxxum has had ‘enormous success’ with Samyang since the company’s inception in early 2013, and now numbered retailers like Diamonds, Michaels, DigiDirect, Georges, DCW and even pro resellers Dragon Image and Borge Imaging among its stockists.

The lenses appeal to young photographers and videographers, as they deliver good performance at an affordable price. The skater fraternity in particular has taken to them. They are also popular among video shooters working with ABC and SBS, according to Mr Ward.

He said that initially the split between stills lenses and cine lenses was 80/20, but now the cine range – particularly M43 lenses which are being matched to 4K-capable BlackMagic or Panasonic bodies – was line ball with the stills range.

The most popular mounts were Canon, followed by Sony E-mount and M43 (Olympus, BlackMagic, Panasonic). He noted that sales of Nikon-mount Samyang lenses had dropped off a little recently.

– But how does all this actually change the photographic industry? If you own a Canon full-frame DSLR, and you are in the market for a wide-aperture 35mm prime lens, your preliminary web browsing will tell you that you can buy the manual-focus Samyang 35mm f1.4 AS UMC for under $650. The (autofocus) Sigma f1.4 35mm DG HSM Art lens can be found for $900. The Canon EF 35mm f1.4 L USM is being offered for around $1900. Or you can go upmarket with the Zeiss Distagon T 35mm f1.4 ZE for around $2300.

But what about the quality – you get what you pay for, right? 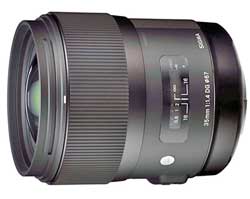 Game-changer: The Sigma f1.4 35mm ‘Art’ series lens performs better than the equivalent Canon lens at less than half the price.

– See why Canon USA might have lowered its L series lens prices? And Canon Australia should perhaps follow?

This newly-competitive marketplace is great news for lens buyers and retailers. More options at more price points makes for more sales. The free market in action.

But not so good for Canon and Nikon. They can no longer command monopolistic wholesale margins when it comes to premium lenses. Buying a Canon or Nikon pro body no longer necessarily locks buyers into a series of expensive Canon or Nikon lens purchases into the future. The razor/razor blade cartridge nexus has been broken. The new competition may encourage the Big Two to drop their prices to better match the likes of Sigma and Tamron. (But then again, being responsive to the market hasn’t been the strong suit of ol’ Canikon just lately.)

The cosy near-duopoly Canon and Nikon have enjoyed for decades in the professional lens segment could be coming to an end. Nikon, which is primarily a camera and lens company, will probably be hardest hit if it looses high-margin lens sales to the interlopers.

And then there’s the alternative professional-standard camera systems from Olympus, Sony, Pentax and Panasonic – yet another challenge to the comfy old arrangements. Times they’re a changin’.
– Keith Shipton