A Toronto-based photojournalist has said she was ‘shocked and appalled’ to find a photo she captured of an Afghani woman being shared without permission and out of context online, by Australian senator Jacqui Lambie, among others. 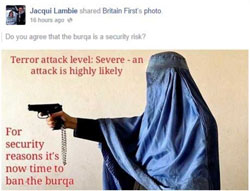 The picture taken by Lana Slezic which depicted an Afghani woman in a burqa wielding a pistol was initially hijacked by a far right British political party, Britain First, which slapped the words ‘Terror attack level: Severe… For security reasons it’s now time to ban the burqa’ over the image, and posted it to Facebook in late August.

Then all was quiet until Palmer United Party senator, Jacqui Lambie came along.

Lambie shared the image and quickly attracted widespread media attention prompting a reaction from the photographer, who revealed the origins of the image was far from what was conveyed.

The woman wearing the burqa is Malalai Kakar, Afghanistan’s first female police officer who stood for women’s rights during an ‘extremely difficult’ time for women in the country, which ultimately led to her being gunned down by the Taliban in 2008.

‘I’m shocked… I cannot believe how Malalai’s image has been really desecrated on Jacqui Lambie’s Facebook page,’ Slezic said to the ABC. ‘It’s a misappropriation of Malalai Kakar’s identity of her family. It’s an insult to her family and her children and I’m appalled by the way it’s been used really.’

Slezic said the image was taken in the policewoman’s office in an attempt to convey the difficulties she faced as a female in the Afghani police force.

‘To have this image used in this way really is such an insult to Malalai – she would be turning in her grave and I am also deeply insulted by the use of the image in this way.’

The manipulated image suggests that the burqa conceals the identity of individuals who may be inclined to threaten the security of a nation – a debate which has likely been raised at many dinner tables across Australia.

The image has been removed from both Facecbook pages and Lambie has taken aim at the ABC and Slezic, saying that her reaction was an ‘explosion of vitriol’ and a ‘gross over-reaction’, and that Malalai would probably side with her – but failed to address using the image without permission.