While Getty has sponsored Tropfest for a number of years, the stock agency stepped it up a notch last month by announcing its new role as the Official Photography, Video and Production Music Partner for the short film festival. 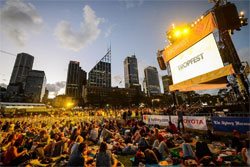 Any audio and video outside the free download selection will be available for license from $100.

In exchange, Getty will handle all the distribution of finalists’ films for Tropfest Australia 2014, and no doubt attains exclusive rights for photographing the event.

‘It is a rewarding experience to see some of the world’s most talented young creatives use Getty Images’ content to produce such fresh and innovative work and we are really looking forward to seeing what this year’s entrants will produce,’ Stuart Hannagan, vice president of Editorial Imagery, Australia Pacific, at Getty Images said in a press release.

Much like the embed feature introduced earlier this year by Getty, this initiative provides a plethora of resources to those who would otherwise not have access to it, and is good PR for Getty. Unfortunately the only ones really giving anything away are Getty’s contributors, and again as in the embed feature, they have no say in the matter.

Pro Counter approached Getty regarding whether or not their content creators would be reimbursed for the free licensing of their work and received no response.

Entrants to Tropfest will likely be tempted to rely on the free stock imagery and audio provided by Getty instead of sourcing content from local artists, although Getty is more than happy to ‘arrange a simple licence for a small fee’ for any content outside its Tropfest selection.

He blamed market forces for driving the cost of photographs down, and offered advice to those in the industry:

‘Photographers need to have multiple revenue streams. They have to have their assignments, ideally creative or commercial ones, editorial assignments, and they need to have somebody handle distribution or print sales.

‘Photographers remain good when they also spend some time on their personal work. That’s crucial. Also, increasingly you have to be able to shoot video.’

Another photography-centred Tropfest partner is Nikon, offering a D610 and $3000 worth of Nikon gear for the winner of the ‘Nikon DSLR Film Category’.