In part two of this two part series on public photography and the law, intellectual property lawyer, Sharon Givoni, delves deeper into the legal framework of public photography – explaining why the rules are in place and how straightforward street photography can potentially amount to copyright infringement.

Click here to read part one, which outlines the basic rules for public photography in different environments.

Take it away, Sharon…

Commercial vs. non-commercial uses: What is the difference when getting permits?

Many councils turn a blind-eye to ‘low impact commercial shoots’ such as a wedding shoot – but not the Cairns Council Source: Cairns Regional Council promotional video

Generally speaking, if your work is intended for commercial purposes, it is more likely that you will require a permit. The definition of ‘commercial’ may vary, but broadly speaking, when your photograph will be used in association with a product or service, it will generally be considered a commercial use. Really, anything that involves some sort of money making purpose can amount to a commercial use. This naturally could extend to photographs taken for newspapers, even where it’s taken for the purpose of reporting the news – newspapers are sold and photographers get paid.

The lines can become blurred when a photographer takes a photo non-commercially, which is later used in a commercial context. Regardless, the point is that when commercial photography becomes your financial livelihood it is best not to take risks. You don’t want to find yourself in a circumstance where you on-sell the image to someone else only to have to later retract it due to the absence of a permit. 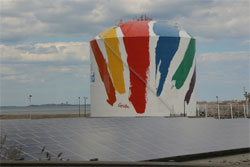 An 86-year old American photographer scored himself a spot on the FBI’s Suspicious Activity list for photographing this piece of public art Source: Kevin Rutherford/Wikipedia

Why are these laws in place?
As inconvenient as they may appear to be, the rules and regulations are generally in place for a number of reasons – including safety, privacy concerns and basic public order. Further, they ensure that not too many professional photographers are in the same place at the same time and set the standard for professional photographers (with rules relating to crew size, start and end times, permitted equipment and the like). In the case of general bans, the rules are in place to prevent photos being taken surreptitiously and subsequently exposed on the internet. Additionally, terrorism concerns have also led to restrictions of photography in popular public places.

Copyright issues
It is important to touch briefly on the issue of copyright. Although generally the person who takes a photo is automatically the owner of the copyright, this can depend on the reason the photo was taken and if the photograph is for someone else pursuant to an employment contract. There are of course a number of complications and exceptions that may arise, so when it comes to copyright, legal advice is always warranted as the devil is often in the detail. Even if you have obtained permission to shoot in a specific location, you also need to be wary of not infringing copyright. Obtaining permission and infringing someone’s copyright are very different matters when it comes to the law.

Photos involving other people’s public works
Sculptures, monuments and artwork are generally protected in their own right under copyright laws, and therefore can’t be reproduced without authorisation from the copyright owner. However, sections 65 and 66 of the Copyright Act 1968 (Cth) generally permit people to take photographs of works of ‘artistic craftsmanship’ so long as the work is ‘situated, otherwise than temporarily, in a public place, or in premises open to the public.’ This basically means that public art, buildings, models of buildings, and sculptures can be photographed so long as they are permanently on display. 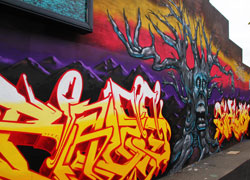 This photograph taken by Chris Scott did not require a permit. Source: supplied

Graffiti and Street Art
Graffiti is also a relevant consideration for Australian photographers, particularly in Melbourne, dubbed as the ‘Stencil Graffiti Capital’ of Australia.

If a work of street art takes up the whole frame of your photograph you would generally need permission from the artist if you plan to use it commercially, for example by reproducing it on a t-shirt, to avoid overstepping their rights.

Private places
A basic common law understanding is that the owner of a piece of land is allowed to control whatever goes on there. This means that an owner is within their right to stop or restrict you from taking photos when you are on their land. This can be deceptively onerous because many publicly accessible areas are in fact privately owned, such as shopping centres, bars, restaurants and markets.

However, nobody can stop you from taking photos of private land, so long as you are standing on public land (i.e. not trespassing) this means that if you are on the street, you can take photos of privately owned buildings or inside somebody’s property.

Of course, if taking photos of people in private property, care must be taken not to infringe anti-voyeurism laws. Further, you need to check that where you are standing is itself not subject to some sort of overriding permit requirement. Dotting your i’s and crossing your t’s can be quite a task these days for the day to day photographer.

There is another page! Click the page numbers below to continue!