When a monkey grabs a camera and presses the shutter release, snapping a selfie – who owns the copyright of the image? Wikimedia believes no one does, despite requests to remove the images from the photographer, whose gear the monkey used to take the photos.

Wikimedia, an online repository of media files, continues to provide a free download and licensing of the images captured by a crested black Macaque monkey in Indonesia, listing it as ‘in the public domain’, as it has no ‘human author’. 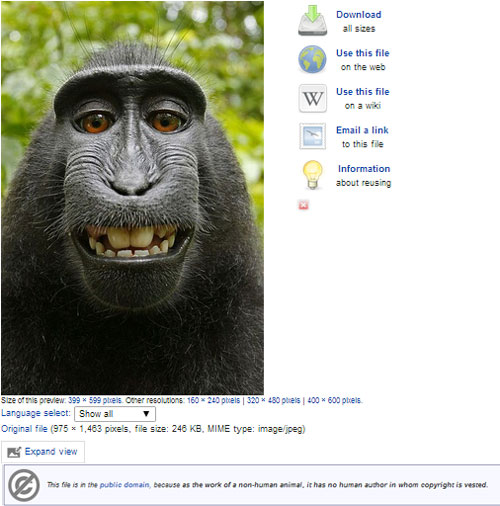 ‘Rotated and cropped by David Slater’ is the only credit David is given on the Wikimedia page.

British wildlife photographer, David Slater, sent the take-down requests as he believes that he owns the copyright – being the one who went to photograph the Macaques in 2011.

David told the Today Show that ‘the monkey was my assistant’, even though the monkey was not hired, paid, or directed to take the picture. Wikimedia has credited the photo as a ‘self-portrait by the depicted Macaca Nigra female’.

Having failed to reach a resolution with Wikimedia, it looks like legal action will follow and a judge will make a tough decision as to whether David owns the images or not.

In a video interview with ITN posted last week, David explains that Wikimedia is ignoring the ‘effort, the scale, the technical knowledge, [and] the vision behind it’. He says that they are acting as the judge and juror, by ‘guessing’ who owns the intellectual property, thereby ‘ruining’ his income stream. He added that the trip was very expensive and he didn’t gain much financially despite the popularity of the images.

David spent three days in the Northern Sulawesi jungle earning the monkeys trust, but wanted ‘that one shot, full in the face. But it wasn’t going to happen, not unless they took the photograph themselves’.

This account suggests that David knowingly planned the photo, which reads differently to his initial interview with The Guardian back in 2011, where he says he left the equipment for a few moments to find the monkeys playing with it.

‘They were quite mischievous, jumping all over my equipment. One hit the button. The sound got his attention and he kept pressing it,’ David told The Guardian. ‘At first it scared the rest of them away but they soon came back – it was amazing to watch.’

Wikimedia is using this interview as the source to suggest that David did not have intent or creative input for the image captured – which is essential in US copyright law.

David told Pro Counter that ‘the creative input and origin of the monkey taking the shots is with me’, and he fails to see how these shots differ to trail cams with triggers, trip wires, and IR beams. He said that many more photographers are at risk of losing the licensing of images to Wikimedia in these circumstances if he does not fight the media giant.

Pro Counter requested permission to publish the images for free, given we are reporting on the copyright issue, but he requested a £20 licensing fee. Make what you will of that.