Adobe has made a handful of announcements this week, which includes an iPhone version of Lightroom Mobile and ‘Photoshop Mix’, a permanent ‘photography’ Creative Cloud (CC) plan, and new Photoshop CC features. 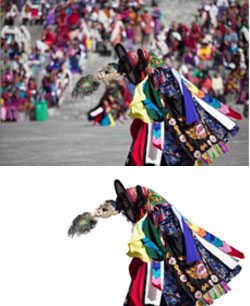 In action, the Focus Mask tool can remove foreground subjects from backgrounds.

In no particular order, we will begin by covering the new Photoshop features – which consists of a ‘Focus Mask’ tool, two blur effects and faster overall performance.
The Focus Mask selection tool, which was teased by Adobe a week ago, can automatically determine selection areas based on subjects in focus -determining hard edges against a background with softer edges.

The two new blur effects, Path Blur and Spin Blur, have been added to the Blur Gallery. Both blurs are fairly self-explanatory, with Path Blur following a path (not necessarily straight) with control over the speed of the blur. Spin blur creates blurring in a circular motion, again with control over the blurs speed – ideal for things like setting car tyres in motion.
Adobe also says the application is running 15 times faster, which if true is a pretty big improvement. There is some other minor features, tweaks and improvements, but nothing overly significant.

Creative Cloud now has a permanent plan for photographers. When Adobe first moved to the cloud, many photographers felt they were left out of pocket because they only sought Lightroom and Photoshop. Instead they had to subscribe and pay for an extra seven programs essentially irrelevant to photography. Adobe then introduced a ‘limited offer’ of just Photoshop and Lightroom, which was continuously extended and appeared to be quite unlimited.

Now there is a ‘Photography’ subscription, which includes the latest version of Photoshop and Lightroom desktop, mobile, and web for the same price – $10 a month, or $120 a year given subscription requires an annual, pre-paid commitment.

Lightroom Mobile App, which was released not long ago exclusively for iPad, is now available for iPhone. As usual, Android has been left until lucky last!

Finally, Photoshop Mix is a mobile app (only available for iPad), that provides basic Photoshop tools. It looks quite simple to use, given the limited parameters of touch-screen devices. As with all things Adobe these days, it is connected to ‘the cloud’ so all files can be saved in cyberspace to ensure the files are safe and the iPad hard drive isn’t clogged down, and the files can also be sent to other CC applications.