The Australian Federal Government has just announced a budget that may have a lot of citizens biting their nails as they wait for the Senate to finalise what will be implemented. 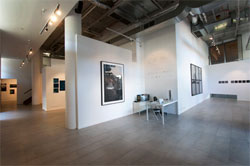 The exhibition space which is now closed. Source: qcp.org.au

But the effects of a $12.5 million budget cut implemented two years ago by the Queensland Government is still being felt, and forced the Queensland Centre for Photography (QCP) to shut its exhibition space in South Brisbane last week.

The slash to arts funding will continue as it rolls out progressively, over a four year period, with many other arts organisations having to shut up shop according to the ABC.

After being notified about a cut to core-funding last October, QCP unsuccessfully sought new partners to continue operating the exhibition space.

The not-for-profit organisation is now negotiating a partnership with Los Angeles-based Curatorial Assistance to open a new gallery in Los Angeles ‘to provide an increasingly global platform for Australian artists,’ Peter Annand, Chairman at QCP wrote.

While moving from our backyard to a distant neighbours may seem odd, the QCP states it has attended the annual Photo LA exhibition for eight years, and successfully tapped into an overseas market that budding artists would fail to do so otherwise.

The National Gallery of Australia’s senior curator of photography, Gael Newtown, told the ABC that the money brought into Queensland from QCP’s attendance at Photo LA might be worth a million a year, and she expects that support from State and Federal Governments will dwindle.

‘It will be only probably the crème de la crème that will get to go into the LA market and [the new] venue, and many of the others who get that help along the way by showing in the smaller centres – they will lose out,’ she said.

The QCP will continue running its publication, as well as providing a range of educational programs within the scope of funding.

‘We would like to thank the community, volunteers, individuals, partner institutions and sponsors that have supported our operations for the past decade and we hope in the future, when the environment is propitious, to reopen a venue in Brisbane,’ QCP Director Maurice Ortega said. ‘New partnerships and programs will emerge as we engage in this new project and we will continue to work with government, sponsors and artists to support the development of Australian art.’

Queensland Arts Minister Ian Walker believes that philanthropic support will assist the survival of the QCP, but Mr Ortega thinks a ‘mass migration to the southern states, like Melbourne and Sydney’ is more likely.

Around 700 artists have utilised the exhibition space over the decade it was run.