Following hints and leaks, Adobe has finally released a Lightroom iPad app, which can only be used by Adobe Creative Cloud Subscribers. 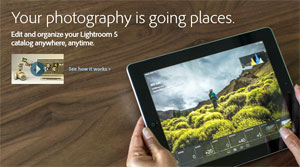 The app, which only works on iPad 2 or later, running iOS 7 or later, cannot be used without a Creative Cloud subscription, which starts at US$9.99 per month and includes the Photoshop CC app. A 30-day trial is available for anyone curious to try it out.

Lightroom Mobile is based on the desktop program and provides basic editing tools that is synchronised to Lightroom 5 for desktop computers when connected to the Internet, removing the need to export/import images. Images can still be worked on without an Internet connection – you just have to enable offline editing, which copies previews to the iPad and automatically uploads it once a connection is established

The editing tools are the same as the ones found on Lightroom’s desktop Develop module, including white balance, exposure, contrast, clarity, sharpening, saturation and so on. While this may seem limited, it is only v.1.0.1 and updates are expected. In true app fashion, the user-friendly swiping, tapping and pinching is how you operate the program. It will be available for iPhone later on this year and much further down the track for Android.

An article at Macworld.com points out that the iPad is not a colour-managed device, which a few photographers may find problematic when a project has a high reliance on colour accuracy. (Although X-Rite has just announced a – you guessed it – app for calibrating devices.

Adobe also does not suggest this app should be used as a standalone program. It is a ‘companion app’. Many features available in the desktop version are not available on the mobile version, like being able to sync your SLR with the app. In theory this would require a laptop with Lightroom running, and an internet connection to then sync to the iPad.

The app along with the free trial is available here.