Last month Pro Counter ran a story about a new microstock business ‘Prime’, run by the photo-sharing website 500px. The objective was to ‘change the way photos are licensed’, but at a commission rate of 30 percent for photographers, 500px members did not share the company’s enthusiasm. 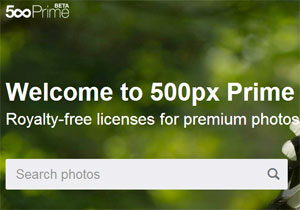 The maelstrom of negativity has been heard by 500px, who have since flipped the commission rate around, offering 70 percent of sales revenue to photographers.

The blog post by 500px announcing the launch of Prime did not acknowledge the original post, which simply adopted standard stock agency rates – but nonetheless acknowledged the ‘race to the bottom.’

‘The industry is plagued by low royalty amounts – sometime pennies per photo – and the slashing of royalty percentages,’ wrote COO of 500px, Evgeny Tchebotarev. ‘It is bad business and it’s simply not fair. There must be a better way to do this.’

Licensing for a single image starts at US$250, meaning a single sale equals to US$175 in the photographers pocket – a much nicer figure than US$75. Mr Tchebotarev says this model is the ‘best dollar and percentage deal in the whole industry by a wide margin.’

Unlike the original blog post, the new announcement has evoked a far more positive response from the community, with active communication running between 500px staff and users.

500px hopes to revolutionise the commercial licensing industry, which cannot come at a better time following Getty’s new embed feature – which offers its entire catalogue for free for ‘non-commercial use’.