Stock agency’s rates have never been so low, especially now given the world’s most powerful stock agency is offering images for free. Getty Images has announced a new embedding feature which will allow  most of ‘its’ collection – around 35 million images – to be available to anyone for what it calls ‘non-commercial use’.

The agency is claiming this new move is to reduce online copyright infringement, but it’s hard to see any benefit to photographers, and the real business agenda appears to be improving Getty’s bottom line without sharing that new revenue with photographers. 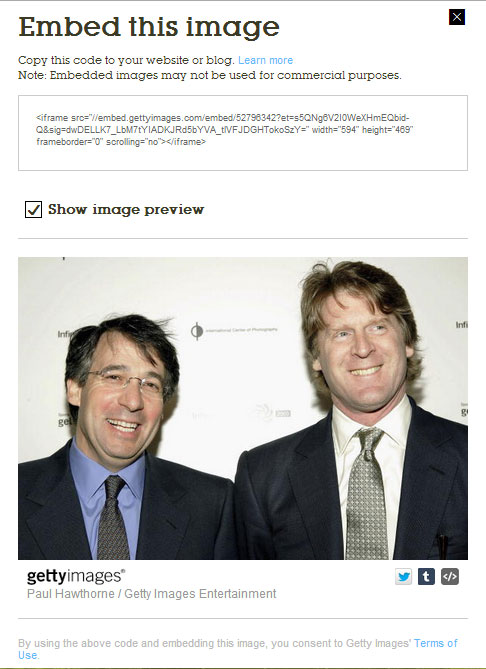 The new feature simply provides html code to copy and paste. The image above is exactly how it appears on websites (without a link).

‘What we’ve seen is a significant amount of infringement online in an area, unfortunately, that we can’t control because this is how the Internet has developed,’ Getty Images senior vice president of business development, content and marketing, Craig Peters told BJP. ‘What we’re trying to do here is to put a legal method in place for that to happen and that actually benefits our content owners.’

According to Getty’s Terms of Use, ‘commercial use’ covers advertising, promotions, merchandising, endorsement and sponsorship, which opens the feature up to editorial use – whether its a Tumblr blogger, Pro Counter, Buzzfeed or the Sydney Morning Herald.

Mr Peters does not believe the larger news publications will take advantage of the service as it will feature Getty endorsed advertisements and links. However, businesses that operate quite commercially now fall into the ‘non-commercial use’ definition, meaning photographers will definitely lose some revenue to the new feature.

The free images, including the AFP archives, are only available at a low-resolution: a maximum of 594 pixels in width and a height of 469 pixels for full-frame horizontal images. Vertical images appear to go up to 695 pixels in height.

Getty’s terms for the embed feature state that Getty ‘reserves the right to place advertisements in the Embedded Viewer or otherwise monetise its use without any compensation to you.’ And by the way, contributors have absolutely no say in the matter.

The advertisements, which will soon be imposed, will run over the image prior to showing it, similar to YouTube. It has not yet been revealed whether Getty will run multimedia ads with sound but the odds suggest that they will. This will create a vast new revenue stream for Getty with absolutely no plans to pay contributors.

No watermarks will appear on the image, which features a white strip underneath it featuring a large Getty Images logo and a much smaller accreditation to the owner, as well as a link to the image’s licensing page (see above), making the only real benefit to photographers exposure.

‘As the saying goes, your mother cares about your credit. I’m not sure anyone else does,’ Business Practices chairman of the National Press Photographers (US), Greg Smith, told BJP in a phone interview. ‘It’s nice to have, it’s necessary and it’s part of the business, but it doesn’t help pays the bills. And that’s the bottom line that we face as photographers.’

In addition to accreditation and a link, Mr Peters said Getty will have access to the ‘information on who and how the image is used and viewed,’ reserving ‘the right to utilise that data to the benefit of our business’. Mr Peters weaved that information into how the new move will benefit photographers, but did not say whether Getty plans to share any information with its contributors.

Getty has been a driving force in creating precedent for how photo stock agencies are run. This move has the potential to once again shift the way other agencies do business and puts the whole microstock industry at risk, further solidifying its dominant position.

Since the implementation of the new feature, microstock agency Shutterstock shares have been falling steadily. Shutterstock CEO Jon Oringer states share price fluctuation is natural, but he is surely biting his fingernails behind closed doors.

The company has made assurances it will not negatively affect the revenue they make from Getty and Mr Peters says the agency will continue to ‘pursue online infringing use as we’ve done traditionally’. Not that they will have to pursue as much – having turned what was copyright infringement into revenue. Well played, Getty.

Pro Counter approached Australian stock agency, Photo Beast, for comment following Getty’s new strategy. Managing director of Photo Beast, Shane Bodger, got back to us and his response can be read here.