Chairman and CEO of Facebook, Mark Zuckerberg, may argue that his business is God’s gift to man, citing its role in the 2011 revolution in Egypt. But it’s unclear what he thinks of the widespread cyber-bullying and the tragic First-Worlders on Facebook who endlessly whine about their daily problems, describe their breakfasts in painstaking detail (with accompanying pics) and partake in online brawls for public entertainment. 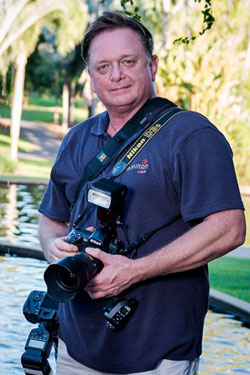 A point in case is Darwin glamour/fashion photographer, Mark Hamilton (pictured right), who initially attempted to play the role of the White Knight, using his Facebook page to rant about model agencies he works with not booking their models paid work. This quickly descended into the photographer threatening a model with releasing ‘racy pictures’ and telling them to all ‘burn in hell’, among other things.

Unfortunately online rants nearly always come off as self-serving and childish – if you plan on doing a ‘name and shame’, expect a reaction.

Former Kiss model agency director Renee Bashford justified her business practices with a thunderous attack-is-the-best-form-of-defence response, deploying the trusty Cap Lock for emphasis, hash tags for ‘virality’ (that is a word now), using colourful language, and for good measure throwing in accusations of drug use and perversion, which Mr Hamilton described as defamatory. Charming stuff indeed.

If only Mr Hamilton had his crystal ball – he could have looked into the not-too-distant future and seen that the Twitter defamation case won by a New South Wales teacher last week created an Australian legal precedent for online defamation. A former student posted a nasty rant on twitter making false allegations about the teacher, resulting in $100,000 in damages.

But he didn’t. And when model, Kahlia-May Gepp (who Mr Hamilton claims he selflessly helped ‘for years totally for free’) ‘Liked’ the defamatory post from Ms Bashford, it was enough to make the photographer see red.  To Mr Hamilton, clicking ‘Like’ must have seemed like pledging allegiance to the other side. ‘And after all I’ve done for you…’

No one goes out and ‘likes’ the ALP and the Liberal Party, Apple and Samsung or Nikon and Canon. It just doesn’t make sense to do so.

The logical Facebook thing to then do is defend your honour by sending private messages to your defecting ally, threatening to release ‘piccys you may not like’ if she doesn’t detract that damned ‘Like’.

Mr Hamilton has since apologised for his online antics, putting it down to being ‘cranky’, using the age-old excuse of having ‘had a few beers’ and insisting that he does not condone cyber-bullying. (Whatever the appearances to the contrary might be!)

The journalist for NT news who wrote the original article, Megan Palin, had once been Facebook Friends with Mr Hamilton, but he has since ‘removed’ (or ‘unFriended’) her due to the ‘twisted’ reporting.

No-one involved in this tacky but broadly-reported Facebook fracas has enhanced their reputations – and all over a measly old ‘Like’!

Common sense would dictate that grown-ups avoid this kind of social trench warfare – especially in their professional lives. But as they say, common sense isn’t that common. Perhaps the $100,000 fine to that slagging student will do more to convince the Facebook luvvies to play nice with each other.