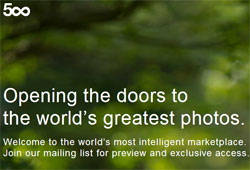 500px currently have a preview of the new licensing business

Prime’s modest objective is simply to ‘change the way photos are licensed’, at the same time ‘bringing dignity to the photographer’. Licences for a single image will start at US$250, with the photographer receiving just 30 percent of the cut – or $75 for every image sold at the ‘base rate’.

A maelstrom of negative comment from disappointed 500px supporters followed the announcement. Over 100 comments were logged on 500px’s blog post outlining the new ‘project’. (There were two or three favourable comments among them.)

‘I’m a huge supporter of 500px and love what you guys do but this is just not the way I expected you to go’, 500px user Michael Woloszynowicz wrote.

‘For print services I can understand a 30 percent split since the cost of production and materials is a large part of the sale [500px also sells prints of subscribers’ work with 30 percent going to the photographer], but in an agent capacity it’s merely on-par with what every other stock agency is doing. For a company that speaks to their users so often and understands the challenges they go through… it surprises me that you would even propose such a revenue share.’

Most photographers are arguing there’s little dignity in earning just $75 for the use of an image. Prime might respond that this is the current market reality, given the predations of the industry-destroying microstock phenomenon.

Getty Images takes 70 to 80 percent commission, depending on the licensing agreement. Getty-owned iStock’s default rate is 15 percent. These abysmally low rates are standard for stock agencies with the exception of Alamy which offers 50 percent commission.

A part of Prime’s pitch is using 500px’s three million registered users, a large portion who are pros, to give buyers an insight into how photos will be ‘received and perceived’ prior to licensing.

This includes a search engine dedicated to ‘potential vitality, hero status and visceral reaction’. According to 500px this is ‘revolutionary’.

We asked 500px to give further details regarding commission rates, pricing and how the ‘revolutionary’ search engine actually works, but have not received a response. (But we aren’t Robinson Crusoe – 500px has also avoided responding to the aforementioned furore from subscribers!)

Overall, it looks like another microstock company with a bit of a twist – best suited for amateurs and enthusiasts who would be delighted to see any money coming in for their images (a whole other issue in itself).

While 500px has acknowledged the need to change the way photos are licensed and the importance of a ‘transparent and honest relationship’, in launching Prime it doesn’t seem to have done anything to further that cause.

‘There is too much art exploitation in this world If you really want to be different, don’t join that crowd: re-define the photographer/dealer relationship,’ 500px user, Majeed Badizadegan wrote. ‘Every decision should come from a place of respect for the photographer’.