Renowned Australian conflict photographer, Stephen Dupont, has unveiled a theatre project called Don’t Look Away, which blends scripted and improvised dialogue against a backdrop of pictures and footage from the frontlines. 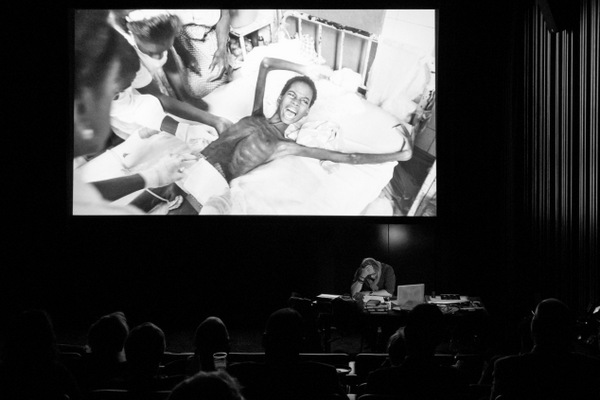 The hour-long production takes viewers to conflicts in Afghanistan, Rwanda, Somalia, Vietnam and other places. The confronting photos show the tragedy of war, and aim to show how shocking and inhumane conflict is for people unfamiliar with it.

‘Don’t Look Away tells us war is wrong, suffering can be immoral and cruel, and yet, the human spirit is unbreakable. I want people to relive some of the stories and events I experienced, to question their own role and memories of these moments and to not forget,’ Dupont said. ‘We all need to be concerned right now. Don’t Look Away won’t just resonate with Australians; the show will be felt deeply from any audience with a sense of compassion and humanity.’

Dupont said that after his mother passed away he felt the need to look into his life, and that meant going through his archive.

‘ I looked back and saw that so many of my photographs had gone unpublished, and I realised I had a visual and written diary cataloguing events over more than 25 years. This inspired me to expose myself and tell the unknown stories that I had personally witnessed, which changed my life forever.’

The show debuted to a sold-out crowd in January at MONA’s Mofo Festival in Hobart.

It will show at the Museum of Contemporary Art Australia during Vivid Sydney in May and June, and will then continue on a national tour.