Lexar has announced a 256GB Professional 1000x microSDXC UHS-II memory card, which is designed primarily for GoPro action cams, sports cams, and tablets, as well as for aerial recording with a drone. 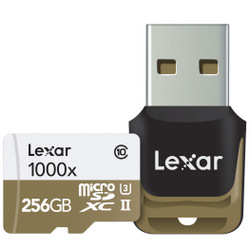 Using USH-II technology, the card can write at up to 90MB/s which allows it to record extended lengths of video footage. And with transfer speeds of up to 150MB/s, it can accelerate workflow by quickly transferring files.

The 256GB capacity makes it ideal for capturing 4K, 3D, and 1080p Full-HD video. It’s estimated to record and store up to nine hours of 4K video or 36 hours of HD footage.

It has passed the ‘Works with GoPro’ verification process, a rigorous testing process to make it perform optimally with the action cam.

‘I use microSD cards in my drones, and the Lexar 256GB Professional 1000x microSD card will enable me to capture large amounts of imagery and high definition video without having to change cards on location. That’s huge,’ said Chris McLennan, a Lexar Elite and professional travel, wildlife, adventure, and aerial photographer. ‘I also use Lexar microSD cards in my Android phone as storage for photo and video content. It’s great to be able to show clients previews of workflow and images I’ve captured without having to carry my laptop everywhere.’

The card is backwards compatible with UHS-II and UHS-I devices. It comes with a lifetime copy of Image Rescue software, and a USB 3.0 reader.