While there has been no formal announcement, the latest price list from Fujifilm Australia indicates that most of its 35mm film stock, including Velvia, Provia and Superia,  will be discontinued in 2017, with manufacture possibly ending as soon as March this year. Film shooters may need to stock up! 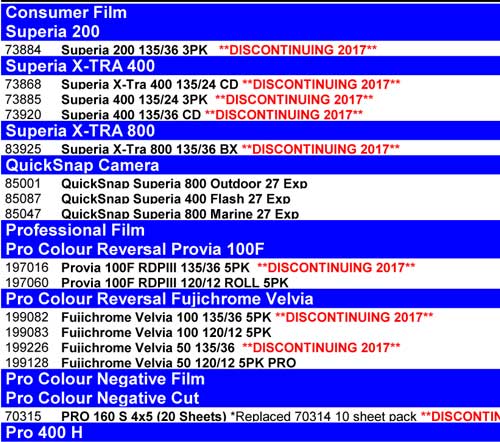 While medium format film is retained, 35mm roll film products to be discontinued are: 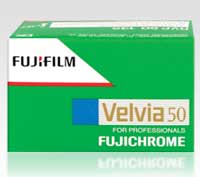 ProCounter has asked Fujifilm Australia for a clarification, but it has declined the invitation. (See its response below.)

However, an email from a Fujifilm help desk rep reprinted on a film users’ Facebook site confirms cessation of manufacture of the emulsions.  A Fujifilm customer asks for clarification regarding whether the discontinuation is just in Australia or global. The response is: The film products you have listed are being discontinued by Fujifilm Tokyo (our emphasis); production of the listed film is ceasing by March 2017 and I can confirm that the list in your email is correct. Fujifilm Australia already have our final stock order in with Japan.

At this time we have plenty of stock of some of these film products, and for others we have orders with Japan for rather large quantities, more than we currently have backorders for from retailers. With that said, it’s only early-mid January and we do expect to receive more orders, so this situation could change depending on any demand increases.

Fujifilm also offers the local market a significantly reduced range of paper substrates. Whereas labs and photographers in the US and Europe are offered a broad range, in Australia and New Zealand there are no options  for minilabs and prolabs besides the ‘standard issue’ Crystal Archive papers incorporating decades old silver halide technology.

Contrast this with the US, where the Fujifilm Crystal Archive options include a pearlescent version; a silk surface; a ‘deep matte’ paper; a version for photo albums; a paper for wedding/portrait photographers; and a premium paper (Crystal Archive Supreme) with a thicker base and gold backprint.

Fujifilm Australia has a close relationship with mass merchants in Australia, through whom it shifts the bulk of its paper stock (even running the online websites for the likes of Harvey Norman and Big W). In other parts of the world, Fujifilm is more engaged with specialist retailers and labs, businesses which are more likely to demand premium or niche paper stocks.

Fujifilm’s response
We asked Fujifilm via its PR consultant Deidre McAlinden:
1. What was the reasoning behind deleting these products from the range?
2. Is this unique to the local market or is discontinuing these SKUs a worldwide decision?

The response was: In response to your email, Fujifilm has advised that they do not wish to comment.

3 thoughts on “EXCLUSIVE: Fujifilm to drop most 35mm film stock”