An Australian wedding photography business will go where no wedding photographer has (legally) gone before – Uluru. After receiving permission from Parks Australia to use the red rock as a backdrop, and qualifying for a Government-funded tourism grant, Uluru Wedding Photography has launched.

The man behind the camera is Darwin AIPP master photographer George Fragopoulos (right), who told ProCounter his business will target Asian – primarily Chinese – couples, in an effort to boost tourism to the Northern Territory.

‘Last year the NT Government had openings for infrastructure and tourism development grants, and I had this idea to bring people to the Northern Territory to have wedding photos taken – specifically Asian pre-wedding couples,’ he explained. ‘Melbourne, down south, and the east coast are popular for shoots, but there’s some beautiful untapped spots around here that fit in with what the government is trying to support.’

The business was funded $40,000 from the Government’s Big Ideas for Uluru–Kata Tjuta National Park initiative from last year. The National Park’s Board of Management, along with the Government, called for ‘culturally appropriate and environmentally sensitive business and investment ideas in the park’.

Minister for Trade and Investment Andrew Robb highlighted in the media release the potential to draw in tourism from the booming Chinese middle class.

‘100 million Chinese went on an international holiday last year, and this is set to double to some 200 million by 2020,’ he said. ‘With targeted investment in the right kind of high-quality infrastructure, Australia is perfectly positioned to capture a growing share of this lucrative market.’ 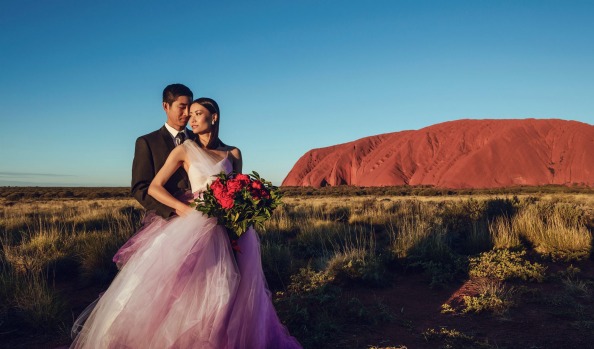 ‘I made contact with Steven, who has made applications to run pre-wedding (photo) tours in the past but hadn’t succeeded. So we teamed up to make a partnership to build the product, which is Uluru Wedding Photography,’ he said.

Commercial photography is notoriously difficult in the Uluru–Kata Tjuta National Park, (which are informally called ‘Ulurules’), due to the cultural values of the traditional land owners, the Anangu. Despite Fragopoulos’ new Park-endorsed photography business venture, the guidelines must be closely followed.

‘We had to have media consultations to know exactly where we can and can’t go to photograph, to ensure there’s minimal impact on guests and visitors,’ he said. ‘There’s also guidelines to what to can and can’t be photographed with Uluru in the background.

‘There’s cultural sensitive spots that you can’t highlight. There’s a lot of restrictions, so every photograph we put out has to be approved – that includes video too. Another restriction is that nothing can be Photoshopped. No dirt or tree can be removed. It affects the cultural representation of the land of the people, so we can only work with what we’ve got in-camera.’

Fragopoulos can enhance colours and make minor adjustments, but the environment cannot be distorted – he’s confident there won’t be any mishaps and everything will run smoothly. Although he had plans to do a composite with the galaxy and night sky, which was shot down.

This may not be the only opportunity for professional photographers to use the park for purposes that would be rejected under current guidelines. However Duncan advised the Park that the wishes of the Anangu people should come first.