Most wedding photographers have experienced a client that makes life hard – whether prior, during or after a wedding shoot – but fortunately, few client relationships result in a defamation case. 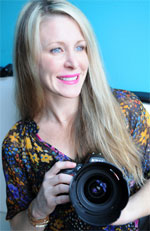 However one US wedding photographer has filed a lawsuit against a couple, seeking US$1 million in damages for defamation.

In the lawsuit, photographer Andrea Polito claims her clients, the Moldovans, ‘sought local media to publish a story based on defamatory and disparaging statements about Polito… to exact unjustified revenge for their personal benefit’.

The lawsuit says that the couple ‘engaged in a smear campaign’, and took ‘pride and pleasure in the harm they caused’.

The whole saga began after the couple refused to pay US$150 for an photo album cover, which they claimed hadn’t been priced as part of the contract or that it wasn’t clearly stated. Polito, who has photographed weddings for over a decade, claims that the contract the couple signed specifies that the high-resolution and un-watermarked digital photos would be withheld until the wedding album was complete. And a wedding album requires a cover, which was priced from US$150.

The couple, refusing to pay the US$150 and annoyed that their photos were being withheld, approached local media in Texas, and NBC 5 aired a story with an investigative journalist interviewing the couple. The story only included a small exert of a much larger e-mail Polito sent to the station, she claims. Other media picked up on the story, such as the Daily Mail, and ran the couple’s side of the story – which was that the photographer was holding the photos ‘hostage’. 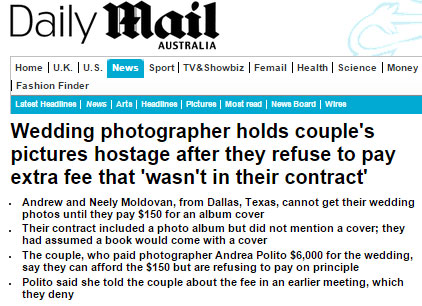 Despite what the couple claims, the wedding photographer says that she was in constant contact with them, and explained numerous times via e-mail the specifications of the contract.

‘Over two weeks ago we emailed the bride and stated our willingness to release to (sic) them their images prior to having a completed album,’ Polito wrote on her blog. ‘Then last week, we also offered to assume the cost of the album cover before the mention of a news interview ever occurred. Although the contract provides when the images were to be delivered, we attempted to make concessions to keep the bride satisfied.’

If Polito’s claims are true, and she says she has all the documentation to prove it, then it will be over to the judge to decide how justice will be served. The NBC story certainly appears to prefer the couple’s side of the story, but if what Polito wrote on her blog is true, the story would’ve taken a far different shape. But then again, if the contract clearly outlined the extra US$150 fee for an album cover, the whole mess could have been avoided.

There are a number of defences against defamation – such as whether the defamatory material is true, or whether it was an honest opinion based on facts.

One thought on “Wedding photographer sues client for defamation”