Intellectual property lawyer, Sharon Givoni, spends a vast amount of time working with professional photographers. While most cases involve the photographer taking legal action, they can also easily find themselves as the defendant. One example is when photographing street art. Sharon has kindly taken the time to discuss this area of law. 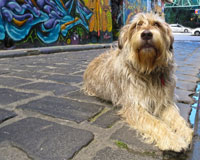 Due to the broad and complex nature of this area of copyright law, we’ve chosen to break it into two pieces. Here’s part one!

Street art has gained credibility as a legitimate way for artists to communicate their works to the public outside of the confines of the mainstream art world.

‘More than ever before, photographers are an essential part of this scene,’ Lou Chamberlin wrote in her book, Street Art Melbourne. ‘Known as paint spotters, they spend their spare time chasing and documenting new pieces as soon as they go up.’

A consequence of this, however, is the raft of legal issues that could potentially arise for photographers of street art.

– You photograph street art and reproduce it on a canvas with other images that you superimposed to create ‘art’ which you sell at a gallery. You are then surprised to receive a letter of demand from the street artist’s lawyer claiming a share of the sale.

– You conduct a shoot for a magazine in an alleyway in Melbourne. In the background of the shot is some street art. Will publishing the photographs be an infringement of copyright? What if it is impossible to determine who created the art?

– You take photographs of street art, frame and sell them. An artist calls you and complains that he or she should have a right to be named as the artist or author of the work, as you have infringed their moral rights. 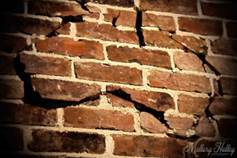 So what are moral rights anyway?

Many artists have heard of the concept of moral rights but there is some confusion as to what the phrase actually means. First, it must be pointed out that moral rights are separate to copyright.

Therefore, it is important to note that just because the artworks are in a public place; it does not mean that you will escape any potential risk of infringing someone else’s copyright or moral rights.

Another brick in the copyright wall

Chamberlin is also a photographer and artist herself. She describes street art as ‘colourful, raw, controversial or witty – because of its transient nature, street art is best recorded through photographs.’

While the term ‘street art’ brings to mind graffiti artists spraying on walls in the dead of night, it also encompasses paintings, stencils, paste-ups, stickers, installations, eco-graffiti, commissioned murals, and ‘tags’ – which involve stylised representations of the artist’s name or pseudonym.

It doesn’t stop there, either. Some street artists even create structures out of plastic crates or perform what is called ‘yarn bombing’ – where items in public, such as trees or bike racks, are covered in colourful crochet.

Walls are the new canvas but what does this mean for photographers?

Australian copyright law permits you to photograph buildings and sculptures if they are permanently situated in a public place.

However, this exception does not extend to photographing artistic works such as street art, and for photographers.

If someone paints something on a wall, it’s protected by copyright law like any other painting or artwork. Under the Copyright Act 1968 (Cth), artists have the exclusive right to reproduce the artwork (whether on a canvas, on the internet or otherwise) no matter what surface that artwork is painted on.

When you photograph street art, you are potentially reproducing the artwork and this could be infringing the copyright in the work. True that the art is on a wall. True that you may not be trespassing. But that does not matter. Even if the street art is not legal, someone still owns copyright in it and that is all there is to it. Copyright laws generally define all two-dimensional art as artistic works.

It’s far more likely that an artist would have an issue with a photograph that features their street art being reproduced and exploited for commercial purposes. (As shown below) 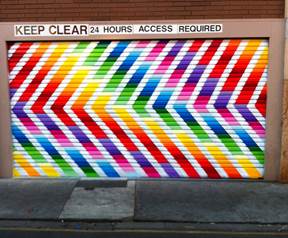 Despite being legal, it could be difficult to identify which artist created this piece, as there is no initials or ‘tag’. Source: Supplied

The Copyright Act prevents photographers from making a ‘substantial reproduction’ without the artist’s permission. Contrary to popular belief, there is no black and white definition of ‘substantial reproduction’ – there is no such thing as ‘the 10% rule’. This is because the legal test for copyright infringement is based on the quality rather than the quantity of what has been copied.

Another copyright issue that is pertinent to street art is that it can often be difficult – if not virtually impossible – to identify and/or contact the author. Sometimes an artist creates their artwork under a pseudonym to protect their identity. The important thing to note here is that copyright will still subsist in the work, even if the author cannot be identified.

A case on point

While you may not think photographing street art is a pertinent legal issue (after all, it’s on the streets and publicly displayed!), it was recently the basis of two law suits in a District Court.

In August 2014, artist Maya Hayuk applied to separately sue two companies, a luxury handbag and accessory label and the a major music label, for copyright infringement of her art.

In both cases, Hayuk stated the defendant companies had prominently displayed her work in their promotional material without her permission.

Hayuk had originally painted her street mural, titled Chem Trails on a wall in New York as part of a 50th birthday tribute to another artist. The wall was apparently privately owned, and the owner often invites artists to paint on it, with the murals only lasting for a short time before being replaced by another artist’s work.

The painting featured patterns of diamonds with bright intersecting lines and dripping paint. In her legal action against the handbag label, the artist complained that her mural was used as a backdrop for a number of model shoots which were then reproduced on the Internet to promote the fashion label’s products.

Similarly, in her law suit against the music label, she complained that one of the record company’s musicians had used her street mural to promote her upcoming album and tour.

Illustration 1: Much like Hayuk, Rowena Martinich and Geoffrey Carran rely on their artwork to pay the bills. This 50 metre long mural ‘To Sile with Love’ was commissioned by the local government of Sile, Turkey. Photo: Rowena Martinich

Her artwork pays for rent…

Aaron Silverstein, Hayuk’s attorney, commented that ‘Maya is an extremely prolific and hard-working artist… [Her artwork] is how she pays for rent and feeds herself, so when there’s a misappropriation of her work, it’s a big deal for her.’

In both cases, Hayuk was suing the companies for, amongst other things, profits gained from the use of her work, as well as seeking an injunction order to stop all use of her mural.

On the basis that Hayuk allegedly licenses her artwork for use in circumstances such as those it was actually used for, she argued that that those uses had caused the artist to suffer a loss of licensing revenue.

Another potentially pertinent issue for the court to consider was the fact that the mural (which has since been replaced) was only meant to be a short-lived piece of artwork, but has now been immortalised without the artist’s consent.

The two defendants are hardly the first big corporations that got themselves in legal trouble for using photos of street art without authorisation. In 2014, an American clothing chain was sued by Miami-based street artist who goes by the name of Ahol Sniffs Glue for incorporating Ahol’s signature ‘droopy eyes’ murals in their promotional campaign.

Amongst other things, one of the images that the company used on its billboards featured a male model standing in front of a mural created by Ahol whilst holding a spraying can, as if to imply that the model had created the artwork himself.

Similarly, in 2007, a group of Bronx-based graffiti artists brought actions against a photographer who published a graffiti book featuring their art. 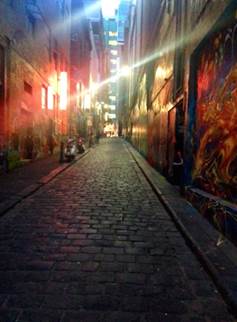 These photos feature street art in an incidental fashion rather than as the main feature of the photograph itself. Photo: Sharon Givoni

What’s the message?
If you are taking photos of street art as a dominant feature of your photographs you should generally get permission from the copyright owner. The risks are usually heightened if you then go on to sell or use the photograph featuring the artwork commercially.

Disclaimer
The contents of this article are of a general nature only and must not be relied upon as a substitution for tailored legal advice.

About the author
Sharon Givoni runs a legal practice based in Melbourne and advises clients in the photography and art industry Australia-wide. She can be contacted on (03) 9527 1334 or 0410 557 907 or email: sharon@iplegal.com.au. W: http://www.sharongivoni.com.au

Sharon Givoni’s upcoming book, ‘Owning It: A Creative’s Guide to Copyright, Contracts and the Law’, is due for release in April 2015. Packed with case studies, Owning It aims to demystify the law for creatives and small business owners regarding the protection of designs, trade marks, copyright, reputation, confidential information and other intellectual property with an extensive chapter on photography. For more information about Owning It, and to sign up to the book launch visit http://www.creativemindshq.com/owningit or http://www.sharongivoni.com.au

Part Two will be here next week! Stay tuned.